Being cosmopolitans, in the name of Japan!

The image of a Japan as closed to foreigners was an image of people who warned me before I went to Japan the first time in 2010. This image made little sense to me during my first experience there. At that time I was living in an international dorm, in a neighborhood full of foreigners everywhere, with English speaking professors and students from all over the world. It was hard to interpret all these as characteristics of a country closed to foreigners. Yet, when I returned in 2012, at the welcome party of my new dorm, guests said I was the first foreigner they ever got a chance to talk to, it already started to indicate the experience was going to be quite a new one. When three different landlords told me they wouldn’t rent their houses to foreigners it made this even clearer.

The new university life also had some new experiences in store for me. A self-proclaimed international department, albeit a different one, attracted a different type of student. While the first attracted international students aiming to get to know Japan, as well as Japanese students with prior international experiences in its majority, the current one, now at graduate level, attracted mostly students aiming to use the university as a stepping stone for job hunting in Japan (known here by the key term of shukatsu). It consisted of both Japanese students who claimed not to have found jobs after their undergraduate degree, as well as international students with hopes of using Japan as the beginning of their international careers. Indeed I was surprised how few students in this graduate school had plans for pursuing an academic career. It became clear, after a while, that job hunting took hold of graduate schools in Japan.

As the department proclaimed to be a international, words like Internationalism or Cosmopolitanism frequently were part of the classes, in which all professors and students were self-evidently proclaimed as “the cosmopolitans” looking at “them, the nationalists”. That might be great for business, as we could put it, but in terms of the lived reality on an everyday life basis in the university, it seemed a little off. This was noticeable in the little things. First, here too, classes could be held either in English or in Japanese, but contrary to what happened in the first department, where experiencing difference was a motivation and students interchanged within languages, in the later department someone who chose to take English classes would rarely see a Japanese student around. This happened simply because the motivation was to get a job. In order to get a diploma and to feel more free to job hunt the easier language is clearly the most pragmatic choice for Japanese students. Another point that makes the contradictions between cosmopolitan speech and everyday attitudes more apparent, is evident in the way cosmopolitanism is discussed. 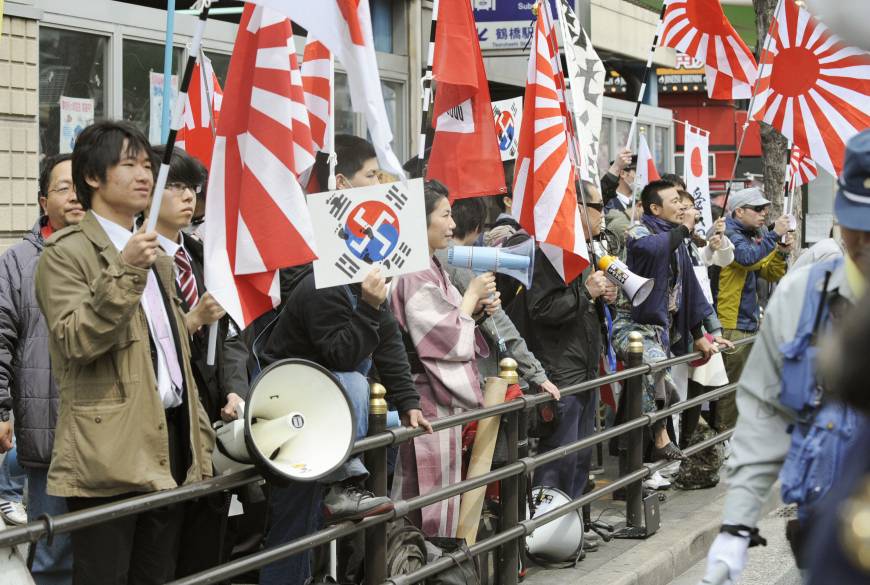 Marches against foreigners have open faces and authorization from the police.

The vast majority of the students claim to be a cosmopolitan in class discussions, but the way in which such claims are made have little to do with cosmopolitanism. These views come from the more trivial, such as a cosmetic cosmopolitanism: being cosmopolitan equals going to different ethnic food restaurants, or traveling around a lot. Or they stem from confusing cosmopolitanism (an interaction with all cultures without hierarchies) with internationalization (the spread of one’s own culture towards others), as many students claim to desire to share Japanese culture with the world. I see this desire as being in sync with the recent internationalization policies of the Abe government. Government officials have said that their desire for the internationalization of education in Japan was to create “Super Global” leaders, “unique Japanese global human resources”, and perhaps the more explicit of them “Japan’s positive attributes must remain, but the thinking should be on a global level, you need to know what being a Japanese means, what Japan has to offer, and know what your local region can offer within a global context.” 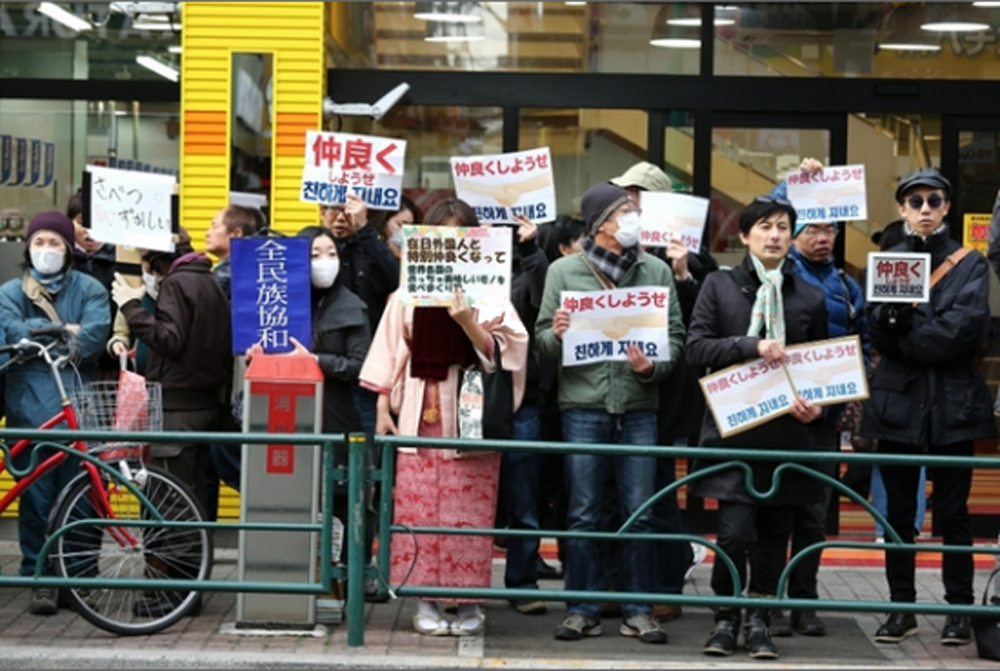 To show solidarity with foreigners, better cover your face for fear of retaliation.

This policy is perhaps the best explanation for what I have called before Internationalization with “Japanese Characteristics”  (in allusion to, or rather mockery of, the myriad of Japan-style things that are produced in Japan discursively). The ideas that “you need to know what being a Japanese means” in order to become global really says it all. This is not, in any way, a turn towards a Global Citizenship, even less Cosmopolitanism, but it is merely a pragmatic use of a certain rhetoric in order to produce “global human resources” that can fit to the need of Japanese imperial policies of internationalization. This idea of being Japanese first is not far from the students’ perspectives of the matter. One student precisely mentioned to me that it was her desire to “spread Japanese culture, both traditional and pop culture, to the world”. Others now share posts on social networks about traditional Japanese culture in English to captivate foreigners to appreciate Japan more. 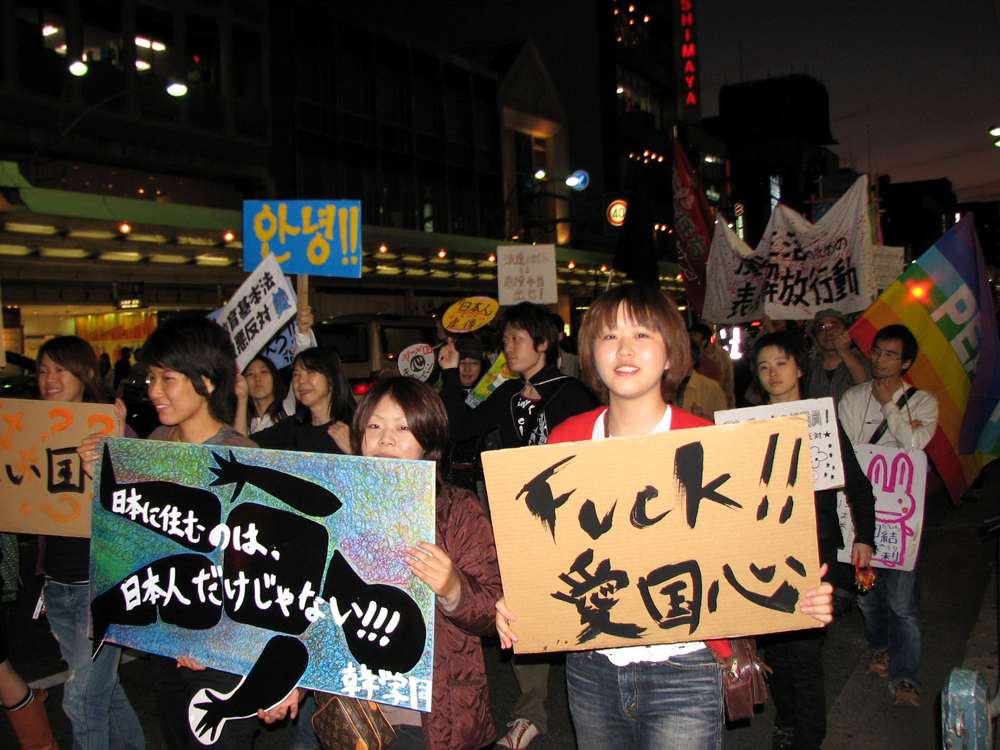 As the poster reminds us: “Not only Japanese people are living in Japan!”

These are the cosmopolitan minds that neoliberal Japan’s international departments are forming: Japanese nationals subjects ready to share the goodness of their country with the world, while reducing “cosmopolitanism” to ethnic consumption. If anything, the growing proximity of the market and the university that transfer funds from knowledge production to on-campus job-fairs also dictates what kind of cosmopolitanism gets to be produced inside universities in Japan. To which we may revisit the idea: Is Japan really a closed country for foreigners, as part of a certain Japanese culture? Or are these elements being produced by other forces (market, state, etc.)? Finally, it also poses the question: Can cosmopolitanism ever emerge within neoliberalism?

I’m currently a researcher at Waseda University, Tokyo at the Asia Pacific Studies program where I conduct my research on Japanese sub-cultures, more specifically on Visual Kei. Following the early Cultural Studies project of Stuart Hall, my goal is to look in subversive subcultures for political potentials for what Blanchot has called La pensée du dehors (The Though of the Outside), as ways to think the outside of an all encompassing form of thinking. This project has also led me to research on Japanese multiculturalism, internationalization policies, as well as minority activism in Japan.