I’m tired. It is one o’clock in the morning. But instead of dreaming in my bed, I’m standing in my kitchen, wearing dirty, old jeans and washing a cauliflower and tomatoes. The clammy carrots on the table are a little bit soft. The pineapple smells moldy. “But altogether”, I say to myself, “I’m ‘saving’ food, that will feed me for two or three days.” I’m happy – and I’ve paid nothing for it. 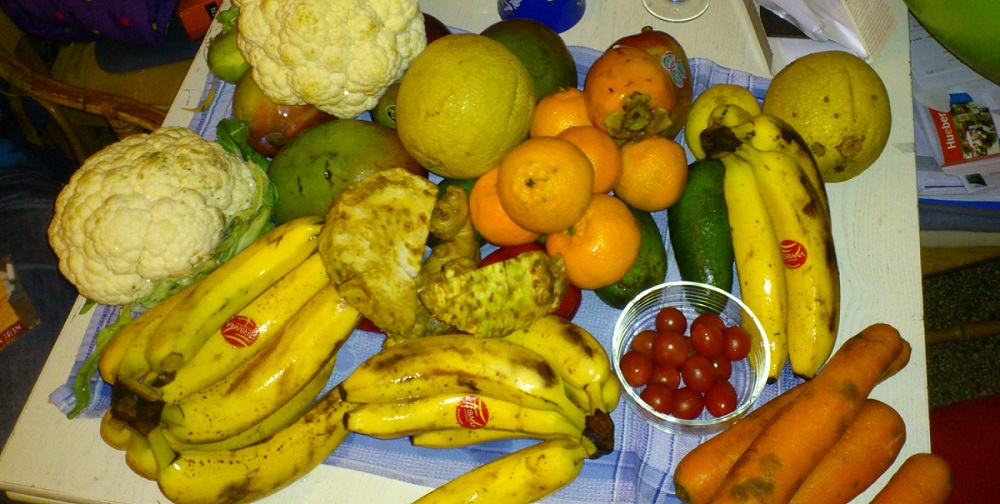 Four hours earlier, I called Laura, a friend of mine, and asked her how to prepare to climb into a dumpster. She laughed at me: “You don’t have to climb into it, most time it’s enough to grab from it. But it’s better to put some old, dark clothes on, just in case. Get the backpack and take some bags with you. Don’t forget your flashlight! And if you are sensitive, take some gloves.”

Laura is a dumpster diver. She first started, when she travelled around Australia. When she started her studies back in Germany, she checked up on the supermarkets in her neighborhood.

“It is better for the environment, it’s like a protest against consumerism. And as side-effect it allows me to buy good things, fair trade or organic”, she told me with a smile, while we were sitting in her kitchen, drinking tea and waiting for the closing time of the supermarket nearby. It was a dark, cold spring night, when she showed me how to get food for free, just by grabbing into dumpsters at the backdoor of supermarkets.

The inside of a supermarket is a place of cleanness and perfection. But as I experienced that night, at the back door, the perfection falls into decay. Millions of tons of edible goods with little damage or spoilt packages are loaded into the dustbin.

The following text will show, how these wasted, unsellable commodities are getting value by dumpster divers. Divers revalue this unwanted “waste” and transform it into delicious dishes.

Issues like recycling and reuse are becoming more and more important in the context of global discourses on the usage of resources. Food and food garbage refer to the discrepancy of an affluent society on the one hand and the shortage of fertile land, climate change and worldwide hunger on the other hand.

Waste is a social construct, whose definition is culturally negotiated and depends on cultural, social and historical contexts. The negotiation about apparently useless things and the handling of garbage reflect lifestyles and mentalities. Waste may be unwanted for one person, and at the same time it can be a useable, valuable and a source of livelihood for others. The waste-dimension is the back of most materials, but food can spoil and become waste very fast.

Food waste and the era of consumerism

Historically seen, it is a young phenomenon that most people in western societies are able to consume all the different goods, which are harvested or produced in foreign countries. In western supermarkets the distribution of food is mostly independent from seasonal crop periods. Better cooling systems and faster ways of transportation make this possible. Most food is packed in plastic packages with a standardised number of items. The presentation of goods and the architecture of supermarkets are based on marketing strategies. For supermarkets the aim is to sell as much as possible and therefore to make greater profit. The best-before date on commodities and sale strategies are reasons why millions of tons of comestible goods land up in the dustbins. Supermarkets explain that fact with consumer behaviour: if consumers could choose, they would buy only the perfect good, which fits to their aesthetic expectations. The rest is unsaleable and  has to be disposed. The documentary of 2011 named “Taste the waste” from Valentin Thurn brought up, why this consumer culture causes global social and ecological problems.

The cultural value of food

From a cultural perspective the valuation of food is embedded in normative and cultural processes. Food has symbolic meanings. Personal identity and social groups are formed through food and nutrition.

How one eats, what one eats or throws away, how one prepares meals and with whom one eats, depends on cultural contexts. Nutrition is a system of communication and a way of social distinction. The perception of food and the practice of nutrition and consumption have changed in the context of commodification and the global flow of commodities. One can say, that food is devalued through standardization, continuous access and low prices. But a growing number of whole food stores and ‘green’ or fair trade products indicate a growing awareness of the relation between social  and environmental problems and moral debates. An increasing number of initiatives and actors try to strenghten the cultural meaning of food by selling not-standarized food, by informing about examples of best practice or by setting up political programs.

Who are the dumpster divers?

One informal and illegal way to increase the meaning of food can be found at the rear exit of supermarkets. The group of dumpster divers mainly consist of young, educated people. Most divers I met during my fieldwork are very aware of food and live as vegans or vegetarians. This way of nutrition indicates a specific definition of what is eatable, which requires a particular stock of knowledge of and an attitude to food production, healthiness and cooking. They experiment withtheir room for manoeuvre to try other ways of consuming and nutrition. On one hand they don’t create demand for goods by reusing discarded food. On the other hand they allocate their budget to use a specific market power to support something that has more ethical and social value in their perception. For instance, they reduce their expenditures for food by dumpster diving and therefore buy more expensive organic and fair trade goods, like coffee or sugar, which are seldom found in dumpsters. Diving is quite often one of different ways to live a life of scarcity. But the financial aspect is thereby only a side-effect. The main focus lies on the message: ‘Don’t waste resources!’.

The political dimension of diving

There is a political dimension in this respect. Dumpster divers criticize mass consumption and throwaway culture, which are based on a capitalist and growth ideology. One way to protest against food waste is to ‘rescue’ the food, which is presented as the main interest of this practice even though it is illegal. Those who dumpster dive out of conviction, consider it immoral that food is low-valued by throwing it away in times of economic crisis and widespread hunger. Laura, a regular diver, says: “I don’t do it because I want to save money, but because it feels like it is my responsibility. I know that the food is there and how I can get it. If I can save the food, then I also have the responsibility to do that.” The consideration is given to social and environmental issues. Therefore it is a part of political protest and a common practice among political activists, like Jeff Shantz indicates in the context of freeganism and anarchy. But diving at night is mostly invisible. So divers often use the media to inform about the issue of food waste, like Philipp Hauschild, who gave many interviews about his “lifestyle without money”. Divers often use this way of publishing to document their experiences, like in Melbourne. When divers are charged for stealing or domestic disturbance, they use court hearings to make the public aware of the theme. Some regular divers have formed a social movement against food waste, the so called ‘Lebensmittelretter’. They cooperate with supermarkets to get the unsellable food for free before the staff load it into the dumpster. To this point, they have built up a strong network in Germany.

Besides the political issues of food waste, dumpster diving can be seen as part of an urban, fun-oriented lifestyle. It is like a treasure hunt at night, which is exciting and adventurous, with the benefit of food for free. Dumpster divers go out at night with some friends or meet other divers by using social networks, like specific homepages, couchsurfing or facebook.  It is a kind of social event, which ends in the kitchen by cleaning the findings and proceeding meals. To be creative and courageous while cooking without recipe and trying new combinations is seen as a part of an enjoyable nutrition by divers. For them, it is a pleasure to try different techniques of preserving, like making marmalade or syrup, preserving in oil, caning or freezing. By doing dumpster diving, one can remember times before the industrial food complex, produce a specific meaning of food and revalue these old preservation techniques.

Two days after my first diving experience with Laura, with bad conscience, I have to throw away the pineapple. Laura reassures me: “You have to check carefully, what you take with you and if you can eat it in time. You have to learn to trust your senses, and not a best before date or a standardized picture of ‘good’ food. That’s important for being a responsible, sustainable consumer.”

To sum up what I learned from Laura and my fieldwork: Dumpster divers negotiate the fine distinction between food and waste by reactivating collective knowledge and by using their senses. Divers uncover the “waste” of consumerism only as unsellable but eatable commodities. Giving the food a symbolic meaning, dumpster diving revalues these cultural products. As an integral part of their daily practice, divers politicize food. They criticise consumer culture and the meaning of food by displacing it. It is an informal technique to resist the established infrastructure of consumption and to implement the normative concept of a transformative or sustainable lifestyle, which is based on global and generational equity, in their everyday life.