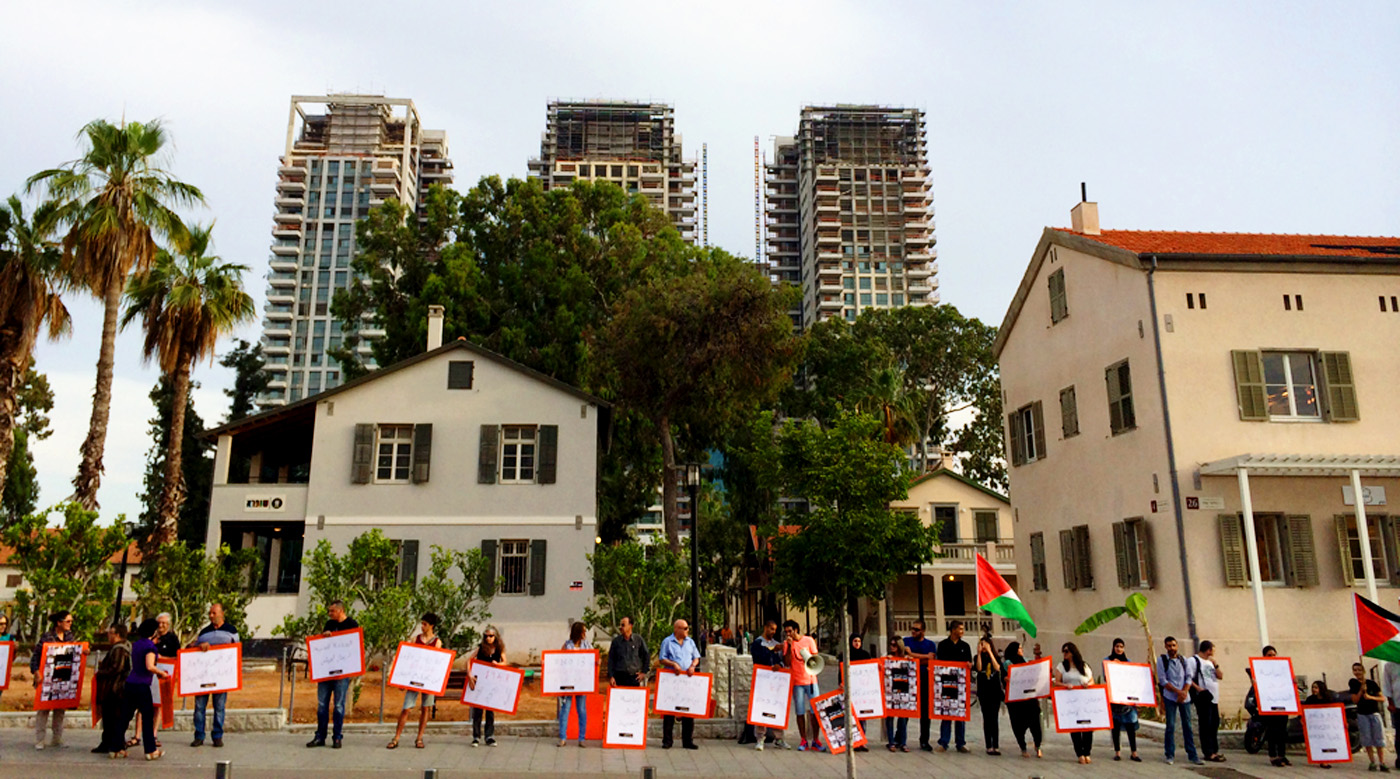 A protest by Palestinians waving Palestinians flags in the heart of Tel Aviv: it was a rare event, an alternative reality that interposed itself into the convenient daily routine of the urban crowd, leaving some in shock, some wondering, and others in hatred and anger. “Die, die you Arabs!” shouts one passer-by towards the demonstrators, a mix of politicians and younger activists mainly from the National Democratic Assembly (NDA)[1], an Arab political party in Israel.

The reason for the protest in front of Israel’s Ministry of Defense were the growing attempt’s by the state – which is defined as explicitly Jewish – to make Christian Arabs in Israel serve in the Israeli army, which is occupying Palestinian territories.

“We must send a message to Israeli society that the Israeli army is a symbol of occupation and oppression,” said Hanin Zoabi at the protest, who is a member of the Israeli parliament for the NDA. “By calling Palestinians into the army, the Israeli oppressor even asks us to be loyal to this oppression. This is not just discriminating, but also humiliating.”

The army has now sent letters to a first row of Christian men, more and more of whom are expected to join. This development comes together with a recent shift in Israel’s official policy towards the Arab minority: a new law distinguishes between Muslim and Christian citizens of the state, recognizing the Christian Arab population as a separate entity. According to the bill’s sponsor, a member of parliament for the right-wing Likud, Yariv Levin, Christians are “natural allies, a counterbalance against the Muslims who want to destroy the state from within.”

Although Tel Aviv is often seen as a quite liberal and open city, the reactions of passer-by’s against the peaceful protest suggested otherwise. Maybe some of those aggressive reactions were based on Levin’s belief that the activists are destroying the state from within? One man drove by in his van and spit out of his window towards the demonstrators. A second one called them to “die”. Others told them to “go back to Gaza”, to “be happy that you are not in Syria.” One man walked by in disbelief and told them to leave the country immediately, “I will give you the visa, just get out of here.”

Awad Abdel Fatah, the General Secretary of Balad/Tajamu’a, said after a motorbike driver tried to pursue the by-standing police to stop the protest: “He is shocked. He wonders how the police can allow us to be here. When they see a Palestinian flag in the heart of Tel Aviv they are shocked. And this shows how isolated and blinded they are. They don’t want to see anything except of themselves.”

When Israel was created out of war in 1948, around 700,000 Palestinians became refugees after being forcibly expelled or fleeing out of fear. Out of the one million Palestinians that used to live in what is today Israel (78 percent of the British Mandate for Palestine), only 160,000 remained in 1949 within the boundaries of the newly formed state. Today, the Palestinian citizens of Israel number about 1.3 Million, or 17 percent of Israel’s population of 8 Million. Another 285.000 Palestinians hold no citizenship, but are permanent residents of Jerusalem, which is claimed by Israel as its capital, although its eastern part is considered by Palestinians and international law to be occupied territory.