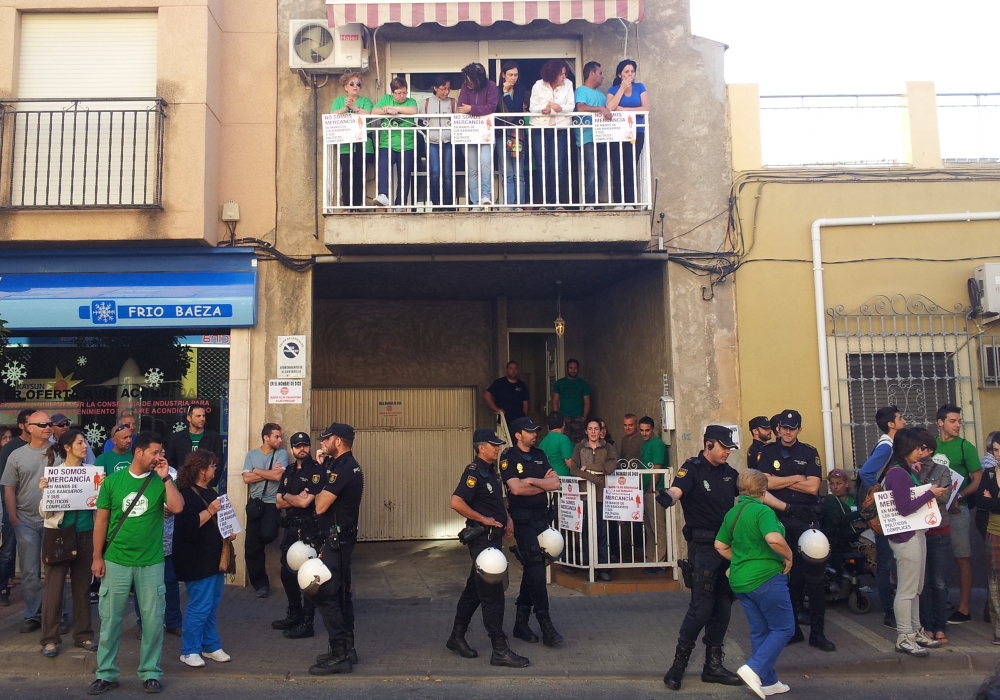 The picture shows the sixth atempt by the state authorities to remove the family of Loli García and Antonio Ortega from their house in Javalí Nuevo, a village outside of Murcia. The official eviction date was scheduled for 9:30 am. A group of local activists from the “Plataforma de Afectados por la Hipoteca” (PAH), a civil society’s movement which supports people threatend by eviction, wanted to be on site really early to occupy the building, and to hinder the police from clearing the home of yet another mother, father and their three kids.

But when the activists arrived at 6:00 am, the police were already there — well prepared and well equipped. A group of officers stood right on the doorstop blocking people like the lady with the green sweater from entering the house. Fortunatelly for Loli and Antonio, another small PAH group had decided to come the day before, spending the whole night with the family. Thus, there were at least a few people inside the house to accompany them. On the balcony next to Loli (blue t-shirt) and Antonio (turquoise t-shirt) are some of the activists who had arrived the evening before.

In the beginning of the scheduled eviction there were about 15 PAH activists inside the building. Another 15 of them gathered outside. Then, bit by bit, more and more people showed up, slowly but steadily changing the ratio of the state authorities and the people in favor of the latter. At 9.30 am, by the time the bailiff arrived, there were about 20 police officers and a little more than 100 citizens. A broad coalition of political activists, normal residents from Murcia and neighbours of Loli and Antonio then peacefully blocked the bailiff from entering the house, chanting and singing slogans of protest. Faced with so many citizens, the police, who were supposed to assist the bailiff with the execution of the court decision, ultimately decided not to enforce it. At about 10:30 am they received the order to unblock the entrance of the house. Finally, they withdrew. So did the bailiff.

For now the eviction was cancelled

A civil society`s coalition had once again helped a family to keep their home. Of course, the citizens celebrated their victory, as you can see and hear in one of the videos the activists produced afterwards. In the case of Loli and Antonio, it had been the sixth unsuccessful attempt to execute the court decision. However, this also means that today’s success is only temporary. In just a few days there will most likely be another ruling from court to enforce it once again. And as one can imagine, the night before the police and the bailiff show up is always incredibly painful and emotionally disturbing for the affected families. It might just be their very last night at home, because they never know whether or not enough citizens will gather to stop the state authorities.

The case of Loli and Antonio is therefore anything but an isolated incident — and after all not my first encounter with these sort of tragedies. Even though until today the Spanish government has failed to provide offical statistics about the number of evictions, estimations suggest that there might have been up to 400,000 cases since the European economic crises first hit the country in 2008. Nearly half a million individual life stories exist — like in the example represented by this picture — where people have either lost their home or are still struggling to not lose it. People’s solidarity and civic disobedience have helped Loli and Antonio to prevail six times. Another seventh round is yet to come. The activists of the PAH will get up early again, and so will the police.

Besides running this blog, I am a German social anthropologist and political scientist doing my Ph.D. at the Universities of Munich and Basel.

I’m currently conducting qualitative research on digital transformations of local politics in Munich, Murcia and Tel Aviv. I believe that digital technologies and social media have the potential to transform our political systems. The question is how? To what extent are citizens involved in and affected by those deep societal changes that we call the “digital revolution”. How do we “do” democracy in the digital age?