On June 21st to 25th, 2015, the International Society for Ethnology and Folklore organized the congress entitled Utopias, Realities, Heritages: Ethnographies for the 21st century. The event took place in Zagreb, Croatia, and brought together over 900 anthropologists, ethnologists, folklorists and others interested in European cultures and beyond. Five of our TRANSFORMATIONS editors organized the panel named “Engaged anthropology: Reality? Necessity? Utopia?”. 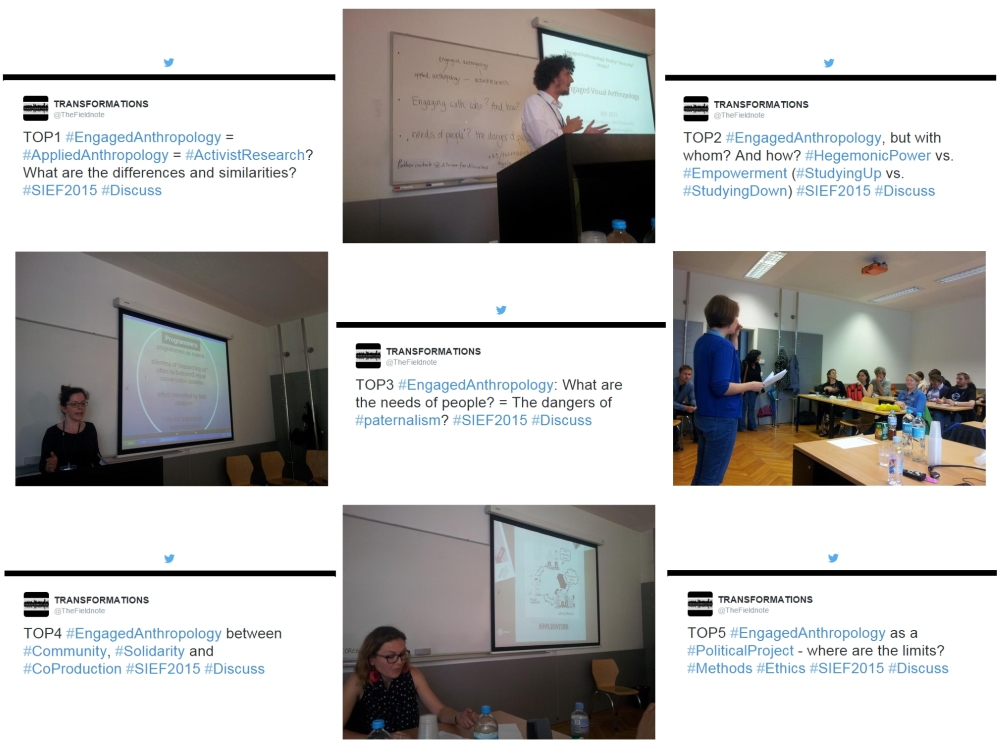 The panel was inspired by the (in)ability of many scholars to grapple with questions of engagement. By questioning the perception of public, engaged anthropology – as an idealized and naïve conception impossible to implement, or as a guiding principle and motor of change behind the work we do – the organizers of this panel sought to discuss, on the one hand, what is the purpose of the research and the impact of the ethnographic work, besides producing texts and, on the other, how the research results can flow back into the field. Moreover, this panel aimed to examine the concepts of activism, public engagement and application in relation to the fieldwork and academia, as well as the ethics of a responsible scientific engagement and the dangers of public visibility.

TRANSFORMATIONS assembled the panel Engaged anthropology: Reality? Necessity? Utopia? because we believe that there are many ways of engagement, each one with its own special benefits and challenges that could be interesting to discuss. The panel was divided in three sections: Activism/Going Public, Applied Anthropology, Challenges/Benefits. On the following, I summarize the main ideas that were shared by all the panelists.

Engagement as a methodological urgency

All the speakers agreed that engagement has been a topic of the discipline from the beginning. There are many different possibilities of engaged anthropology and it’s difficult to find a unique or general formula for engaged actions. Engagement is not only a theoretical or epistemological challenge but also one of methodological urgency. As Begonya Enguix, the first panelist, said: “Our commitment and our engagement have to be a personal position as anthropologist in the field”. She also questioned if “activism is a subjective state of mind” and proposed that activism can be activated in academia through writing academic papers or teaching about marginalized populations, and by providing critical stances on this topic. Her activism was complementary to the activism of her informants. She learned like other panelists to negotiate and to be careful and attentive to people’s needs.

Many panelists discussed about different tensions between being close or distant, and being empathetic or critical. One of the public said that “we, anthropologists, cannot distance ourselves; but not distancing ourselves doesn’t mean that we cannot write about the reality that will describe our position in our frame in that moment. It is the best thing we can do in this moment because we are only little slices of the reality.” On the other hand, we have to be aware of our own social and cultural filters through which we interpret reality. Also, we must take into consideration our emotions and sensations. The most important goal in each research is try to find diverse perspectives and complexity because, wherever we are and whatever we research, that will have an effect. The last panelist, Marko Pisev, finished his speech with the idea that “if anthropology wants to speak out facing growing social problems like racism, xenophobia and cultural fundamentalism, [it] needs to distance publicly from its own diagnosed diseases of self-doubt – we have something relevant to say, so let’s do it”.

At the end, the panel got summed up to the main ideas. These are the five most important questions that were the result of the discussions.

The organizers concluded the panel with a call that they are looking forward to discuss these and related questions, to share experiences from the practice of applied and engaged anthropology, and to exchange ideas about how future engagements could emerge on this blog.

I studied Social Anthropology in Mérida, Mexico, now based in Prague. I´m doctoral student in Faculty of Humanities, Charles University working for governmental and non-governmental institutions, interested in applied and engaged anthropology, education and community development.